Banana Baby Food – 8 delicious (and easy) ways! Bananas are a great first food for baby and can be made into a baby food puree, smashed into a chunky puree, used for finger foods or for baby-led weaning. This guide is perfect for babies 4 months and up!

Bananas are loaded with essential nutrients for growing baby and are one of the top first foods for baby!

This guide will give you 8 easy ways to incorporate bananas into baby’s diet – served as a baby food puree, smashed, as a finger food for baby-led weaning, made into 3-ingredient pancakes or even in a simple baby-friendly smoothie.

BENEFITS OF Banana FOR BABY

Bananas are a great first food for babies because they are loaded with essential nutrients for growing baby including fiber, vitamin B6, vitamin C, manganese and potassium.

WHEN TO INTRODUCE Banana

Whether you start baby on purees or are doing baby-led weaning, bananas are an amazing first food for baby! You can serve bananas to babies 4 months and up.

How to Introduce Banana to Baby

A super easy 10-second Stage One puree for baby!

To make, simply place a banana or two into a blender and puree until smooth and creamy. If you want to freeze, add a small squeeze of lemon juice into the puree to help keep it from browning.

Add a little baby cereal and a pinch of cinnamon to the pureed banana for an easy and tasty meal!

To make, pour some pureed banana (see above) into a small bowl and add in a few ounces of premixed or homemade baby cereal. Mix until combined and add a pinch of cinnamon before serving.

An easy way to expose baby to small chunks of food that you can control the size of. Great as a Stage 3 puree to get baby ready for finger foods or as a puree that baby can (try) to self feed themselves.

When you break the banana up into chunks, as opposed to cutting with a knife, the chunks will not be as slippery and baby will have an easier time holding onto them.

To make, peel a banana and using your fingernails, break the banana into chunks along the seem of the banana. It should easily break into chunks

This handheld version of a banana is a great way for baby to have a handle for the banana as they eat the other end.

To make, cut a 4-5 inch section of banana off from the top. Cut around the peel, leaving roughly 1-2 inches of exposed banana. Do not cut all the way through the banana, just the peel. Then you can peel the peel away and hand the banana to baby.

A fun way for baby to explore different textures and tastes. You can roll strips of banana in hemp seeds, crushed cheerios, puffs, or breadcrumbs.

To make, cut the banana into strips and roll them in a little bit of toppings.

This simple smoothie is great for babies that are drinking from a sippy or baby cup and is filled with banana, ice and a small amount of formula or breast milk.

To make, place a banana, a couple of ice cubes and 1/4 cup of liquid into a blender. You can add in a pinch of cinnamon or 1/2 teaspoon of nut butter in there as well if you want. Blend and serve. You don’t want it too thick or baby might have a hard time drinking it.

These 3-ingredient pancakes are great for baby, a toddler as well as kids! A perfect item to have on hand if you are doing Baby-Led Weaning as you can serve them plain or add a smear of cream cheese, avocado or nut butter on top.

To make, in a medium bowl mix together a mashed banana, an egg and whole wheat flour. I also like adding in a pinch of cinnamon or pumpkin pie spice for some extra flavor. Cook as you would any pancake and serve. 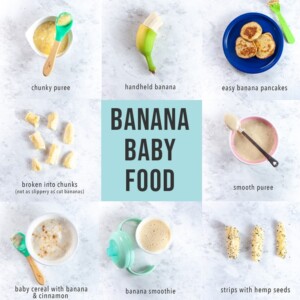 Bananas are a great first food for baby and can be made into a baby food puree, smashed, used for finger foods or for baby-led weaning.
5 from 3 votes
Print Pin Rate
Course: Main Course
Cuisine: Baby Food
Prep Time: 10 minutes
Author: Michele Olivier

Age: 4 months and up
DID YOU MAKE THIS RECIPE?Mention @Babyfoode or tag #babyfoode!