You are here: Home / Food / A Quest to Find the Best Organic Formula for Your Baby
3shares 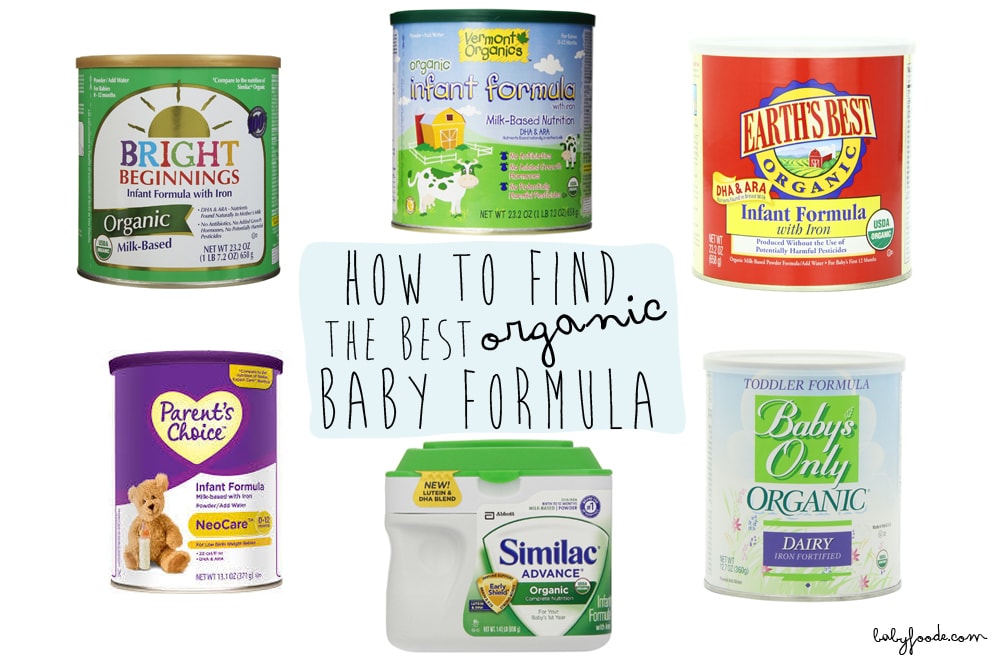 As in many things in life, I was foolish to think that breastfeeding would be easy for me. It wasn’t. In fact, it was one of the toughest things I have ever done both mentally and physically. I had this idea that my little E would latch on and all would be perfect in the world.

She had a hard time latching on, I was in pain from her non-latchings. She liked to eat s-l-o-w-l-y for up to an hour at a time which made my milk supply not be able to become full and robust for her every growing appetite.

But we did it! Or so I thought.

We made it past all the ups and downs and then around 6 weeks she started crying all the way through the night and breastfeeding non-stop until she would finally pass out of exhaustion around 5 in the morning, leaving me 3 hours to sleep and get any sort of milk production going again. After 3 nights of this, I realized I was starving my poor baby. I went to classes, did everything the experts suggested – drinking special tea, eating certain foods, pills, yoga, beer, you name I tried it [except for eating liver, which was not going to happen] but nothing was helping and the nights were getting longer and longer.

I felt defeated and sad because I couldn’t feed my child. I felt like I wasn’t a good enough mother.

So I am going to tell you what no one told me,

Everything will be okay! All you can ever do is the best you can.

Whether you breastfeed for a year or not at all doesn’t make your a better or worse mother, they both just make you a mother.

So during my long hours awake non-stop feeding my baby, I did a little research on what is the best organic baby formula on the market. Most of my information comes from this and this site and I have learned never to listen to anything a brands website says about their products – of course they are going to only say the best things.

And boy oh boy, was it harder to find a good formula then I thought.

Why you should never use conventional baby formula:

Here are the organic formulas on the market in the US:

Ingredients that your formula should not have in it:

All of the formula manufacturers strive to make their product taste as much like human milk as possible and because human milk contains higher levels of lactose (a carbohydrate) then cows milk they have to make up this difference by adding a sweetener to the cows milk.

Manufacturers also try to mimic human milk by adding certain types of oil to equal the fatty acids that is naturally found in human milk. Most manufacturers use palm oil, which studies have shown does not absorb into the infants system but instead forms into ‘soaps’ in the baby’s intestines. These ‘soaps’ can negatively affect a baby’s development and health leading to significantly lower bone mass and harder stool.

“DHA is an omega-3 fatty acid, and ARA is an omega-6 fatty acid.  Both are naturally found in human milk, and DHA is a component of brain and eye tissue.  But the DHA and ARA added to most brands of infant formula are extracted from factory-produced C. Cohnii and M. Alpina—specific strains of algae and fungus that have never been part of the human diet, let alone the diet of infants.” source

While symptoms of DHA and ARA can be diarrhea, vomiting and other gastrointestinal distress the main concern is these additives are produced from algae and fungus that have been extracted using hexane, a neurotoxic petroleum-based solvent. Yup, this sure goes against the NOSB (National Organic Standards Board) guidelines but the USDA keeps turning a blind eye on the companies using this products.

All formulas with the exception of Baby’s Only Organic use ascorbic palmitate and beta-carotene in their formulas for the primary reason to prevent the algal from DHA and ARA oils from going rancid. The NOSB has rejected both of these preservatives in organic products.

The NOSB has rejected the following synthetic nutrients in formula: lutein, lycopene, nucleotides, taurine, l-carnitine and l-methionine. None of these nutrients are required in infant formula by the FDA and banned in organic formula in the European Union.

Lutien – is produced from marigolds and treated with insecticides and processed with neurotoxic solvent hexane.

Lycopene – is synthetically produced during a three-stage process which involves the solvent dichloromethane and the solvent toluene (a neurological toxin derived from benzene).

Nucleotides – is produced from hydrolyzed yeast that undergoes multiple chemical changes in order to extract nucleotides.

Taurine – is produced synthetically using either sulfuric acid or aziridine, both listed as toxic and a pollutants.

L-Carnitine – involves epichlorhydrin, a list 2B material by the International Agency for Research on Cancer and has been rejected for use in organic foods by the NOSB.

Handy-Dandy graph showing you what is in each brand: 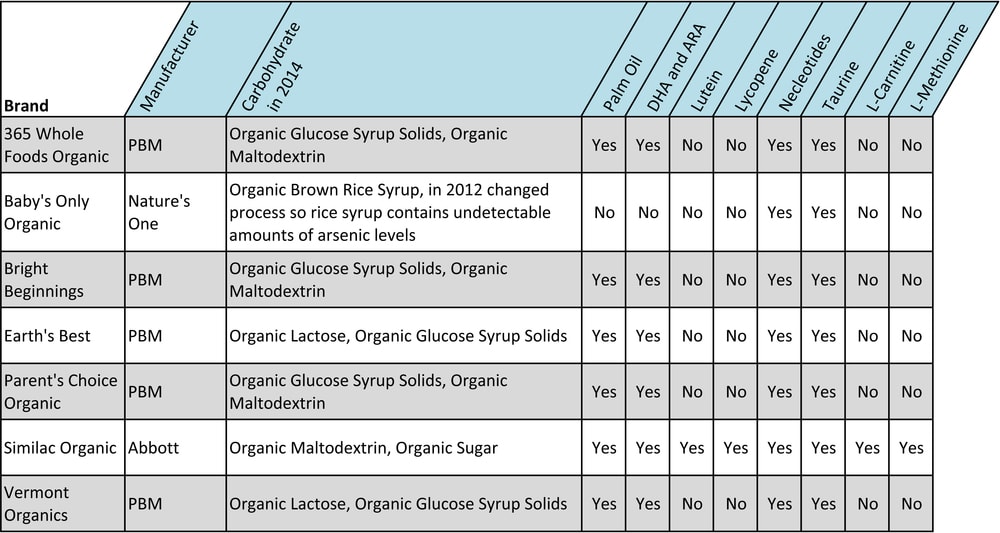 As you can see there is no perfect formula. This graph does show how some are WAY better then others, but none are perfect.

I personally went with the Baby’s Only Organic Baby Formula for several reasons. I liked that it didn’t contain any corn syrup solids, any GMOs, Palm Oil, DHA or ARA or synthetic preservatives.

With that being said, I believe that Earth’s Best or Vermont Organics are also great options.

Making Your Own Baby Formula:

There are several sites that have recipes to make your own. I have personally not tried to make my own but if you have, please leave a comment on how it went. Seems like all ingredients you can get on-line, only takes 10 minutes every couple of days and is cheaper then buying the powdered version.

Radiant Life Company – Kit of all the ingredients you need!

How to Order the Products Discussed:

Baby’s Only Organic Formula has a 4.5 star rating out of 277 reviews and costs $0.11 an ounce. Baby’s Only also makes a LactoRelief Formula and a DHA & ARA Formula.

Vermont Organics Infant Formula has a 4 star rating out of 80 reviews and costs $0.16 cents per fluid ounce.

Want to read more? Here are some great places to start…

This post includes links for affiliate sites. All opinions are my own. Thank you for supporting and helping Baby FoodE grow.