What the Kiddos Ate – February 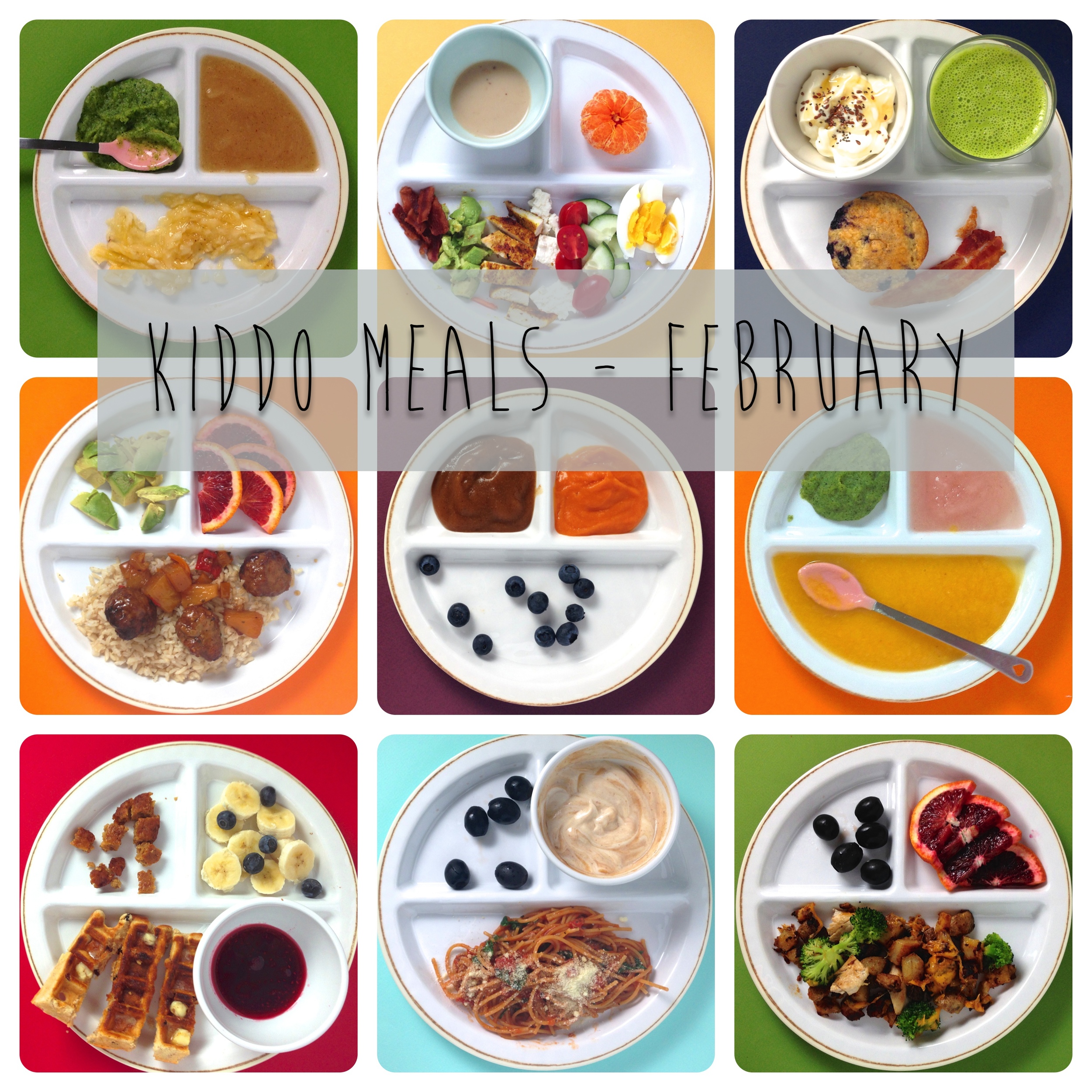 It has been really fun over the last two months taking pictures of most of the meals we eat. Hopefully you can see that we are nooooootttt perfect eaters. No, not us! That would be no fun. My firm belief on eating food is 80% healthy 20% fun. I will say that getting these 3 section plates has made a HUGE difference in the different variety of food I serve, especially to Ellie. Before we just served her meal on one of our white Crate and Barrel plates because almost all of them have chips on them so what harm would a toddler do? But by using these 3 section plates, I really have to think about what I am going to fill in those extra spaces. No lie, sometime this is a challenge! But a good challenge. It makes me think about her meals as an entirety, having me make sure that she has enough healthy fats, greens, vegetables, and fiber in her diet. And because there is always room for some fun, I sometimes throw in a dessert!!.. and by dessert I mean an orange, applesauce with yogurt and cinnamon or maybe if I am feeling extra nice a big chunk of dark chocolate:) 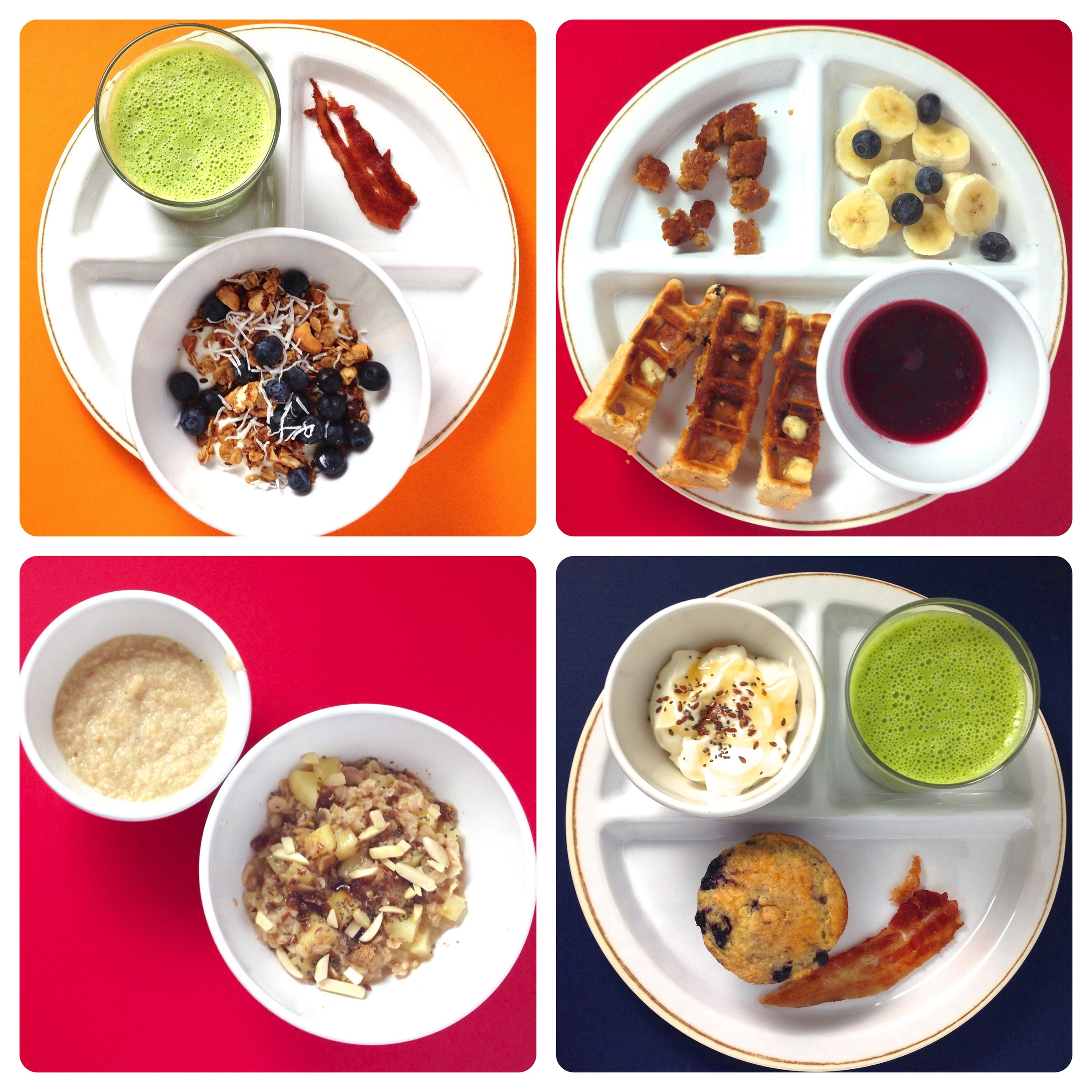 Two things I learned in February is that Ellie will drink almost any smoothie, if we make it together! Seriously, I put some broccoli in a smoothie with her help and she drank it right up. The key is that she has to be able to help load the blender with the smoothie ingredients and she also has to drink from her special smoothie cup (not in pictures because it is a cheap blue plastic travel cup with a yellow straw from Target, which makes all smoothies brown and not so yummy looking:). The second thing I learned is that making a huge batch of waffles on the weekend saves me so much time during the week. I like to sprinkle various toppings (chia seeds, blueberries, cocoa nibs, strawberries, raspberries, flax seeds, etc) into the waffles as I am making them for different flavors.

Top Left
Meal – Greek Yogurt with blueberries, chia seeds, hemp seeds, shredded coconut and homemade granola, a green cucumber smoothie (cucumber, kale, spinach, orange, apple, almond milk and honey) and a 1/2 piece of bacon. Verdict – After I let Ellie pick everything out for her breakfast (a 30 minute ordeal), including all of the items in the yogurt and smoothie, she only drank her smoothie and ignored everything else.

Top Right
Meal – Raspberry and coco nib waffles with raspberry infused maple syrup, banana and blueberry salad, 1/2 soy breakfast sausage and 1/2 hard boiled egg (not pictured). Verdict – She ate most of it! Win!! Then as she was trying to lick the syrup bowl clean she poured it all over herself! Lose!

Bottom Left
Meal – This is actually a baby and toddler breakfast. Organic oats simmered with apples, cinnamon and nutmeg. Then I pureed a couple spoonfuls of the oatmeal for baby Parker and added almonds, flax seeds, chia seeds and a touch of maple syrup to Ellies. Verdict – they both devoured it. Ellie ate 2 huge bowls and Parker ate her entire serving.

Bottom Right
Meal – Homemade whole wheat blueberry muffin (recipe will be posted soon), 1/2 piece of bacon, greek yogurt with honey and flax seeds and a pineapple green smoothie (pear, kale, spinach, pineapple, almond milk and honey). Verdict – she ate 1/2 the muffin and then put the other 1/2 of the muffin in her pajama top for later (that ended well:), drank all of the smoothie and didn’t touch the yogurt. I kept the yogurt in the fridge and she had it for snack. 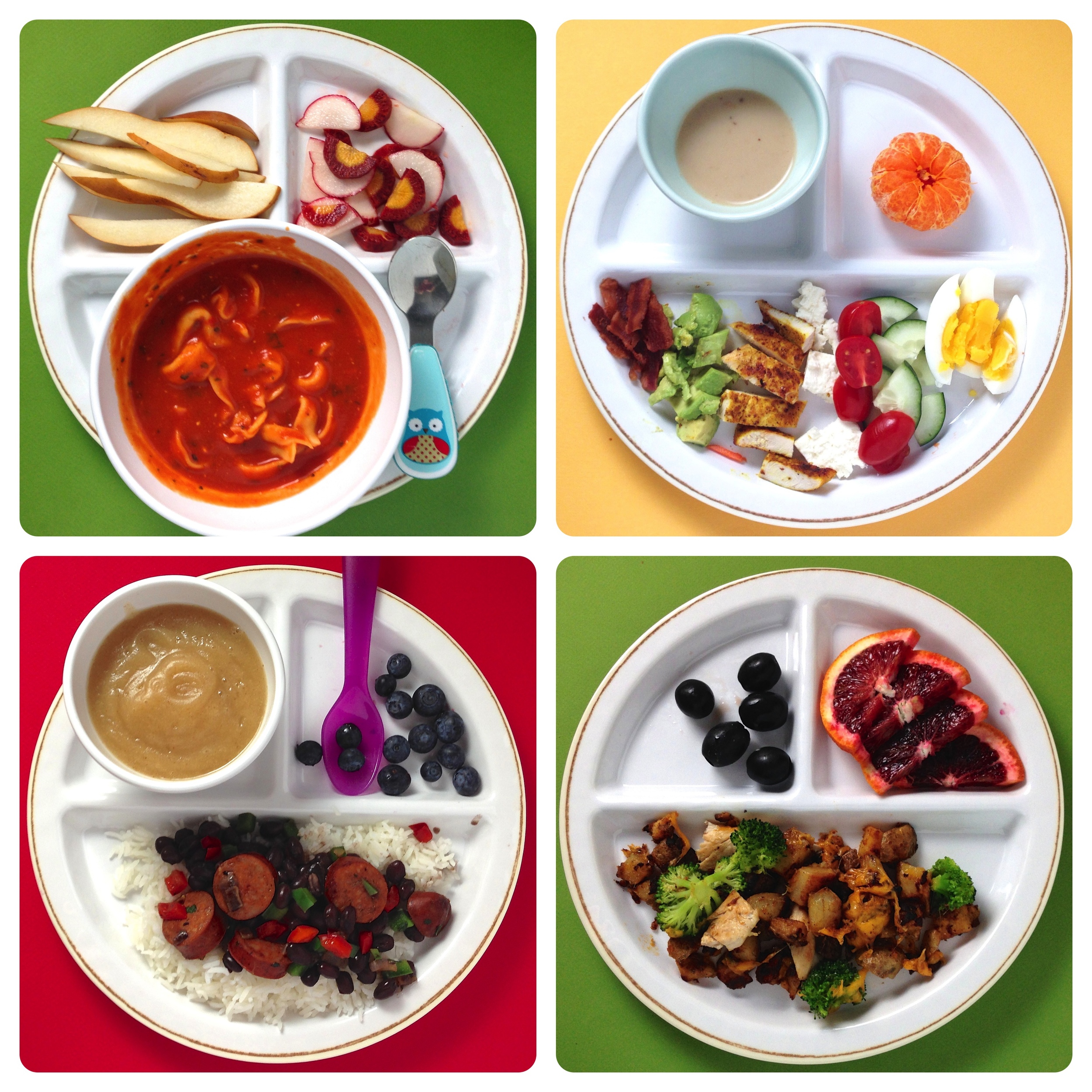 February was a hard month for us because I felt like one of us was always sick, and as we all know cooking for sick kids or cooking when you are sick is not fun. Here are some of our better meals that don’t contain chicken noodle soup or soda crackers.

Top Left
Meal – tomato soup with cheese tortellini, purple carrots and radish ‘moon’ salad and sliced pears. Verdict – she devoured the soup, ate the pears but not the skins (not sure where she learned that), and touched one carrot to her tongue and then tossed it into my soup bowl!

Top Right
Meal – deconstructed Cobb salad – bacon, avocado, grilled chicken, feta, tomatoes, cucumbers and egg. Served with a champagne dressing and an orange. Verdict – Ellie devoured about half of the salad! The dipping sauce was the key to making this deconstructed salad work. Ellie loved dipping everything into the dressing. It was a little messy, but I am sure your toddler is a cleaner eater then Ellie is.

Bottom Left
Meal – Black beans simmered with chicken sausage, red and green peppers and served over rice, blueberries and apple puree (meant for baby). Verdict – Ellie loves rice and beans! Which she ate all of. She ate a couple of peppers and 1 sausage but decided it was more fun to stack the sausages instead of eating them.

Bottom Right
Meal – testing out a potato/cheese/chicken/broccoli casserole meal which I served with slices of a blood orange and black olives. Verdict – Ellie ate all of the olives before I even sat down to the dinner table, then proceeded to eat all of her casserole! She surprised me by not even touching the oranges. Fruit is usually what she eats first. 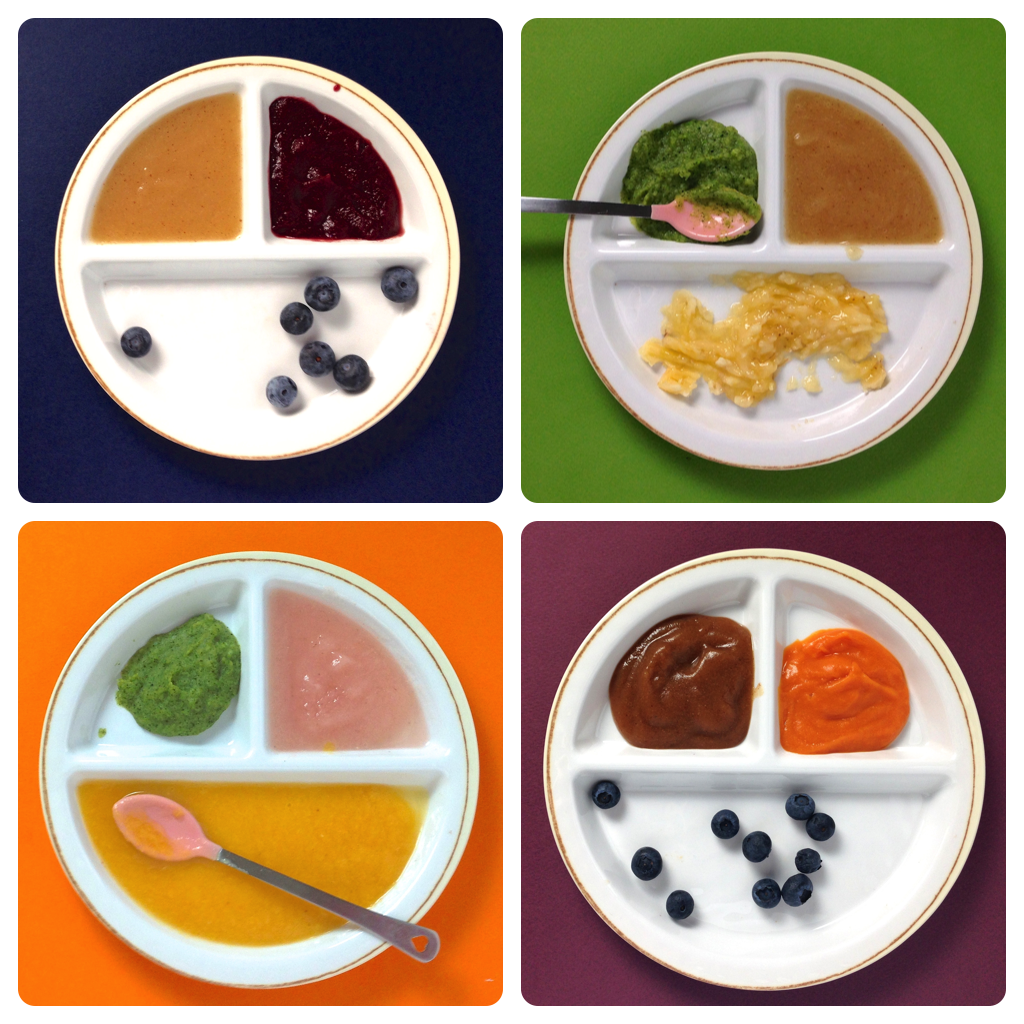 Feeding baby Parker is so much different then feeding Ellie was at this age. Ellie ate like there was nothing better in the world to do. She would open her mouth and not stop eating until there was at least 6 ounces of food gone. Parker is slower to eat, more thoughtful. She likes to put it in her mouth and really taste it. She doesn’t eat as much (quantity wise) but she eats a far broader range of foods. I am about to introduce her to a new batch of recipes, so get ready for some new fun purees!!

Top Left
Meal – baby breakfast of apple and pear puree with cinnamon, purple carrot and blueberry puree and some whole blueberries. Verdict – He loved it all! She really is a good eater in the morning I learned this month so I started feeding her more ounces then I think she will eat and she has surprised me and had eaten it all.

Top Right
Meal – baby dinner of broccoli (served this same night as the broccoli casserole to Ellie) with olive oil, apple puree with cinnamon and a little smashed banana. Verdict – She scarfed the broccoli down! She wanted it before the apple! Not sure she is my baby after all 🙂

Bottom Left
Meal – baby dinner of broccoli and olive oil, beets + radishes with chia seeds and peaches with cloves. Verdict – I decided to serve baby 2 new purees tonight since she has been scarfing down everything I have given her this week (she hasn’t shown any signs of allergies so I wasn’t too concerned) and she loved it.

Bottom Right
Meal – pear + prune with cloves, sweet potatoes with nutmeg and some blueberries. Verdict – baby Parker loves to eat with something in her hands so I rotate between blueberries and an extra spoon. She tries very hard to feed herself but at this point she never quite makes it into her mouth, but it’s very cute watching her attempt to self feed.

What are your kiddos eating this month? I would love to see. Post a pic on Instagram #kiddomeals and follow me @micheleolivier to see more of meals during the month (and random pics of my kids in crazy outfits:)

free guide when you subscribe! Get new posts via email:

8 Comments on “What the Kiddos Ate – February”