First time visiting? Start Here!
How to Feed Your Baby (get the free guide!)
Subscribe Now
Home » Food » What the Kiddos Ate – April

What the Kiddos Ate – April 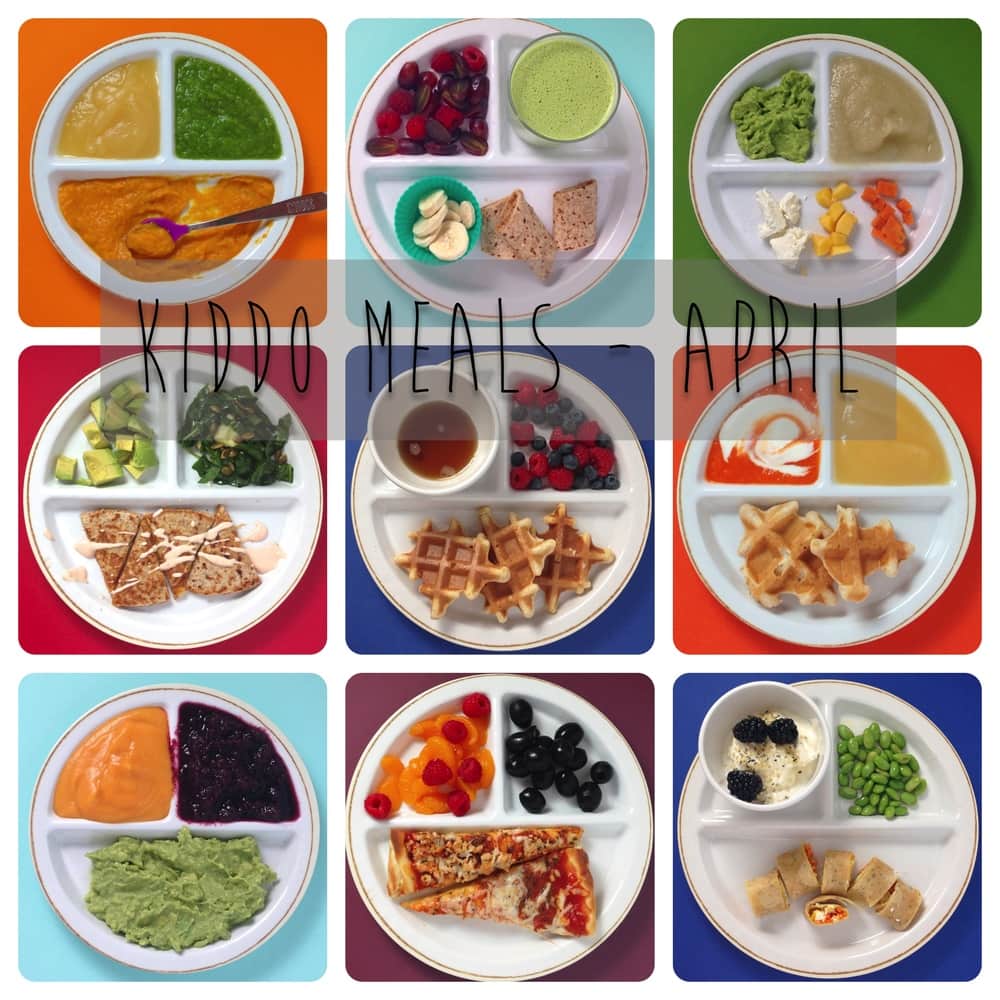 I made it! Just shy of the end of the month, here is April’s addition of What the Kiddos Ate (boy does April seem like forrrrever ago).

And while we are talking about my delinquency, I apologize in the late for not being around the last couple of weeks. I have been having some health issues that I needed to deal with and put on the front burner. Seems like no matter how much I work out and how little I eat, I was still having trouble losing my baby weight.  To be more accurate, I am struggling to keep the scale from going up because no matter what I do, it is only going in one direction. And that direction is not down. So I sought out the help from the amazing Sara to see what was really going on with me.

Turns out my body and I are in a fight and it is hating me and my need to do it all – having babies, working almost full time on the blog, being a full time mom, writing a book, and the endless amount of other crazy things we all tend to put on our shoulders. After she knocked some sense into me, she put me on a 10 day detox cleanse and I decided to use that as an excuse to not do anything but let my body heal and try to recover.

I napped instead of worked.

I took really long walks instead of going for runs.

I listened to my body.

My get-back-to-it body and health still have a long way to go, but for now I am slowly adding my normal actives back into the mix to see how they feel, except the running, that might never come back:) 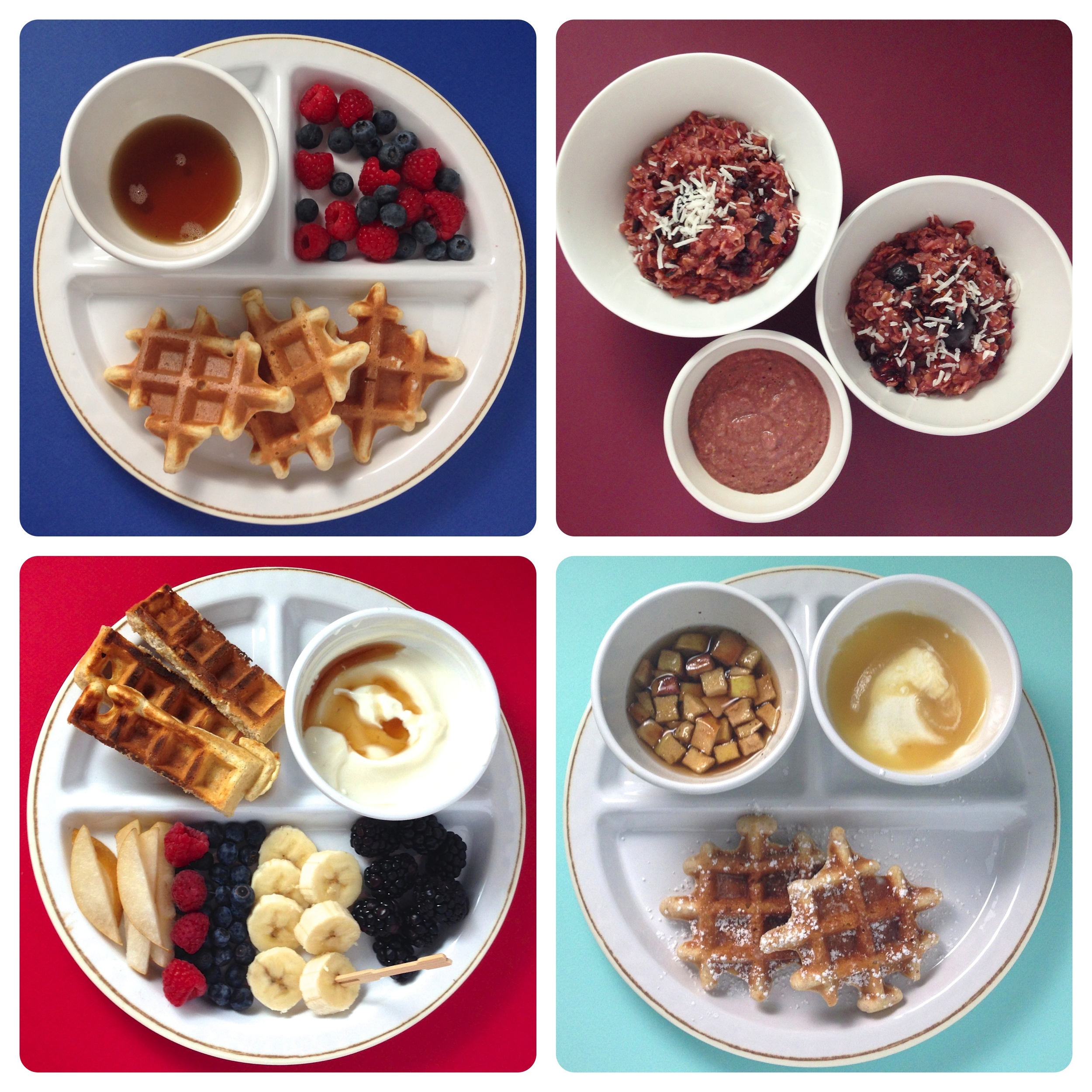 Ellie is now 3 (oh dear lord, I heard the three’s are worse then the two’s) and so far she is over hating on things one day and then demanding them in her life the next, instead she just doesn’t eat?!?! I am so confused by this, Ellie is known for her eating capabilities! I took away her afternoon snack to see if this would help, but during dinner she will just nibble on a little something and then exclaim that she is all done and ready to play. Of course, I make her sit at the table with us until I have finished my dinner and glass of wine… my theory on teaching her manners!

Top Left
Meal- keeping it really simple with whole wheat + chia seed waffles, berry salad and maple ‘dipping’ sauce. Verdict- Ellie ate all of the waffles, 1 raspberry and ended up pouring the syrup all over herself – classic Ellie. I was actually shocked that she didn’t eat more fruit, usually it is the first thing to go.

Top Right
Meal- dark red cherry oatmeal + cinnamon. This oatmeal was for all three of us. I pureed baby’s with a little canned coconut milk. Ellie and I had ours with shredded coconut, cocoa nibs and a splash of cream. Verdict- of course this was a hit..duh – cocoa nibs, coconut and cherries! It was like having a candy bar for breakfast.

Bottom Left
Meal- Another dipping meal – apple, raspberry, blueberry, banana and blackberry dippers, lemon whole wheat waffles and plain greek yogurt with maple syrup. Verdict- not sure why I haven’t learned my lesson with Ellie and dipping meals, they usually don’t work out too well. And don’t even get started on giving her a sharp toothpick to eat it with, I for sure learned my lesson there!! She ate about half of everything but ended up with yogurt in her hair.

Bottom Right
Meal- left over waffles from top left with powdered sugar, apples and maple syrup and apple sauce and greek yogurt. Mind you in April it was still snowing and I was getting way board with everything I was serving. Verdict- loved the apples in the syrup (obviously), ate one waffle and didn’t touch the applesauce and greek yogurt. I packed that into a reusable pouch for our snack on the go. 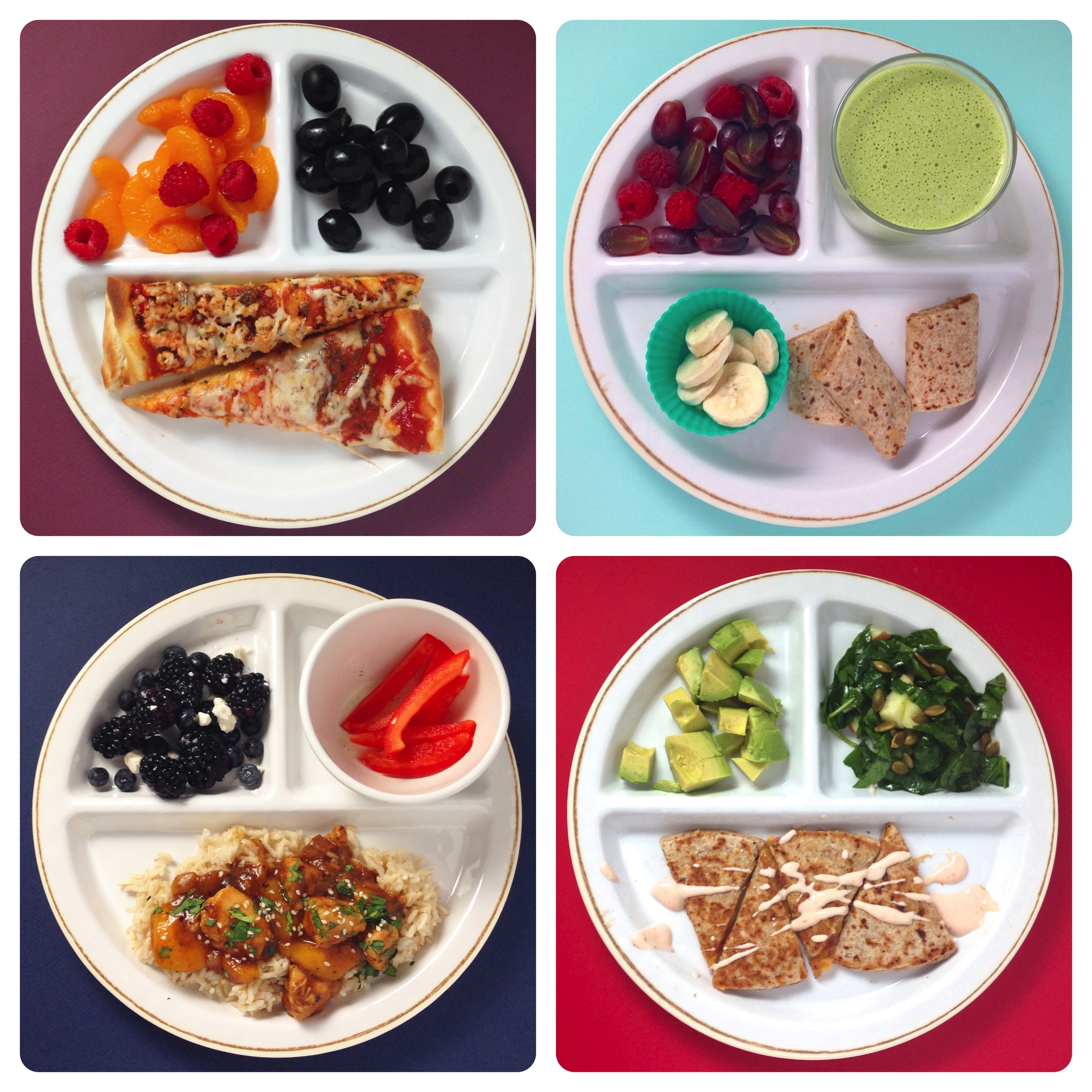 Top Left
Meal- Friday night pizza – homemade pizza, 1 slice is chicken sausage and the other is cheese, orange and raspberry finger salad and a side of black olives. Verdict- Ellie ate the toppings off her pizza and no crust, all of the olives and 2 raspberries. I tried telling her that is was skipping the best part of the pizza but she wouldn’t hear of it!

Top Right
Meal- peanut butter and honey wrap, dehydrated banana chips, grapes + raspberry finger salad and a green smoothie (spinach, banana, hemp seeds, coconut flakes and almond milk). Verdict- Ellie ate all of the bananas, finger salad and smoothie but refused to eat the sandwich. Not sure how my child can hate carbs this much!?!? The only time she will eat a sandwich is if one of her friends is having one for a lunch date – then she has to have it!

Bottom Left
Meal- sesame mango chicken over brown rice, berry finger salad (blackberries + blueberries + feta with a splash of orange juice) and red pepper sticks with ranch dressing. Verdict- She ate all of the berry salad first (guess she is back to liking fruit) and half of the chicken and rice. She tried to be sneaky by putting her bowl of red peppers on my plate but of course I saw her and then made a very dramatic show of finding the ranch dressing at the bottom and eating a red pepper at which point she grabbed the bowl back and ate 3 red pepper sticks! Win for mom!

Bottom Right
Meal- black bean and corn quesadilla on a whole wheat tortilla with spicy(ish) sour cream drizzle, chunks of avocado and a dinosaur salad (spinach, apples, pumpkin seeds and olive oil). Verdict- she gobbled up the dinosaur salad (we made it during a class at our local botanic gardens and she remembered it from there) and the avocado but wouldn’t touch her quesadilla. Again, with the carbs! 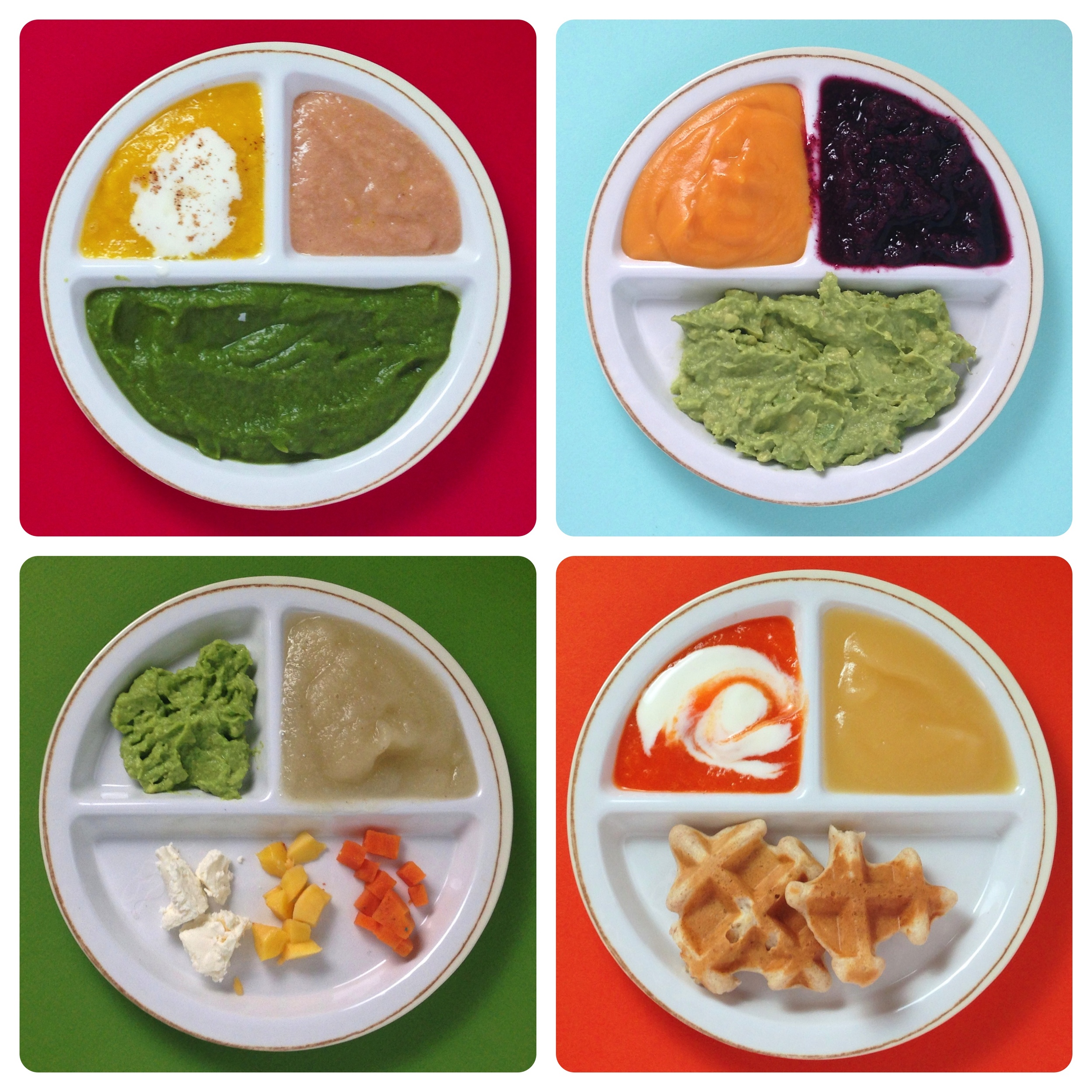 I could feed baby Parker (9 months) all day long and never get board. This age is so fun to present a new food and see what amazing face she is going to pull out of her bag-of-faces! Sometimes it’s pure digest, others pure joy, and sometimes it doesn’t even phase her. April, was a big month for her because she went through her puree phase and is now completely into finger foods. So next month, get ready for a ton of finger food ideas!

Top Left
Meal- asparagus + green beans = broccoli + chives, mango with a swirl of greek yogurt with cinnamon and melon + banana. Verdict- holy moly that was a huge serving of green veggies for the little one, but she ate it right up! All of it!!

Top Right
Meal- smashed avocado with a splash of lemon juice, carrot + mango + butternut squash puree with cloves, and blueberry + apple with cinnamon. Verdict- baby loves ‘quac’ and ate that entire serving of avocado. She also ate all of the blueberry + apple but didn’t care for the orange puree because it had butternut squash in it. This is probably the 10th time I have given her squash and even if I mix it in with another puree, she still doesn’t care for it.

Bottom Left
Meal- chunks of feta, very ripe mango and steamed carrots with parsley, smashed avocado and pears + clove puree. Verdict- baby is all about the finger foods! She self fed all of those chunks and got about half into her mouth. Feta is one of my favorite cheese for baby because it is soft enough that it almost melts in baby’s mouth but firm enough for them to grab onto. She was nice enough to let me spoon feed her the avocado and pear puree to her in-between bites of solid food.

Bottom Right
Meal- sweet potato + whole wheat waffles, carrot puree with greek yogurt and apple + cinnamon puree. Verdict- Baby devoured these waffles and when I perfect it I will for sure share it with all of you:) She even stole some waffles from her big sis’s plate! She also devoured the apple puree and most of the carrot puree.

6 Comments on “What the Kiddos Ate – April”