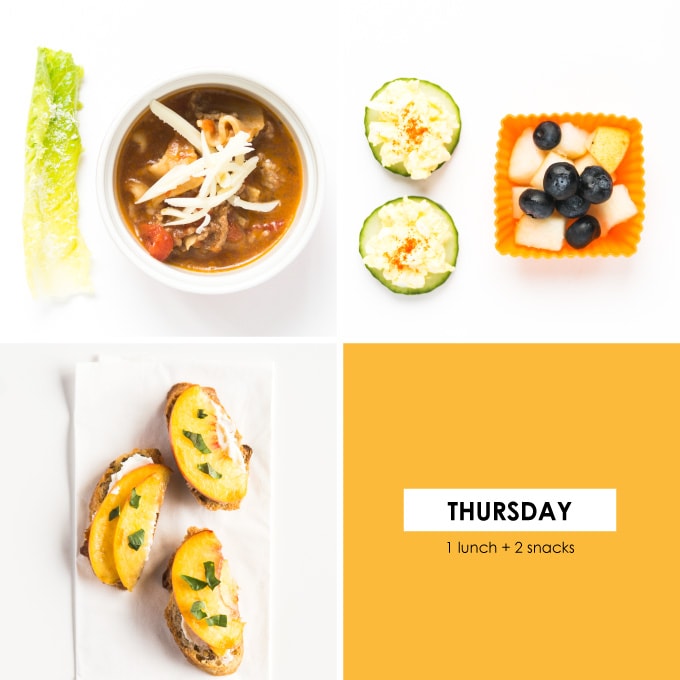 LUNCH – Lasagna Soup & an Almost Caesar Salad
The inspiration for this Lasagna Soup came from the fact that soup season is here and I had leftover lasagna in the fridge. Leftovers I wanted to reinvent for lunch. So, I took a slice of lasagna and some chicken broth and turned it into soup. I have to admit the end result made me feel a little bit like a kitchen genius. In my mind anyway. Literally a few minutes of prep time (the real time having been invested in the lasagna dinner we had the night before) and lunch was made. A healthy, hearty, homemade lunch at home or packed in a thermos for lunch at school or work. It just warms my heart:)

And speaking of inspiration, the kids were behind the almost caesar salad. I feel like there is this salad training stage that goes on with kids. A stage were kid’s really aren’t that impressed with a bowl full of torn up lettuce and/or greens with some cut up vegetables. A stage where if you are creative about the presentation, they learn to see past the fact that it is a salad and focus more on the individual parts.

Often when I am preparing lunch for the kids, I talk about the ingredients that I am using and give them samples to taste test. On this particular day I had some romaine lettuce on the island and one of the kids asked me what it was. Handing him one of the smaller full leaves I said “It’s romaine lettuce, here try it”. He did and then he asked for more. It seemed the full leaves were interesting to him, so I decided to serve it like that for lunch, topped with some lemon juice and grated Parmesan cheese. They all gobbled it up like rabbits.

SNACK – Deviled Egg Salad on Cucumber with a Fruit Cup
I love having Egg Salad in the fridge. It makes pulling together a quick lunch, breakfast or snack a snap. I really don’t think there is a time of day, that I wouldn’t eat egg salad.

Fruit cups are a great way to use up fruit that is ripe, I usually grocery shop on the weekend, so as we get closer to the end of the week, I often make fruit cups to use up the odds and sods that are left in the fruit bowl.

To make the crostini, I sliced a baguette into 1/4 inch thick slices. Placed the slices on a baking sheet or two and brushed both sides with olive oil and sprinkled them with salt. Then I baked them in a 350 degree oven for about 10 minutes, or until golden, turning them halfway through. After letting the crostini cool, I spread on the goat cheese, followed by a few slices of peach and some torn basil leaves. The weekend is coming folks, stock up and give them a try:)