First time visiting? Start Here!
How to Feed Your Baby (get the free guide!)
Subscribe Now
Home » Food » What the Kiddos Ate – May

What the Kiddos Ate – May 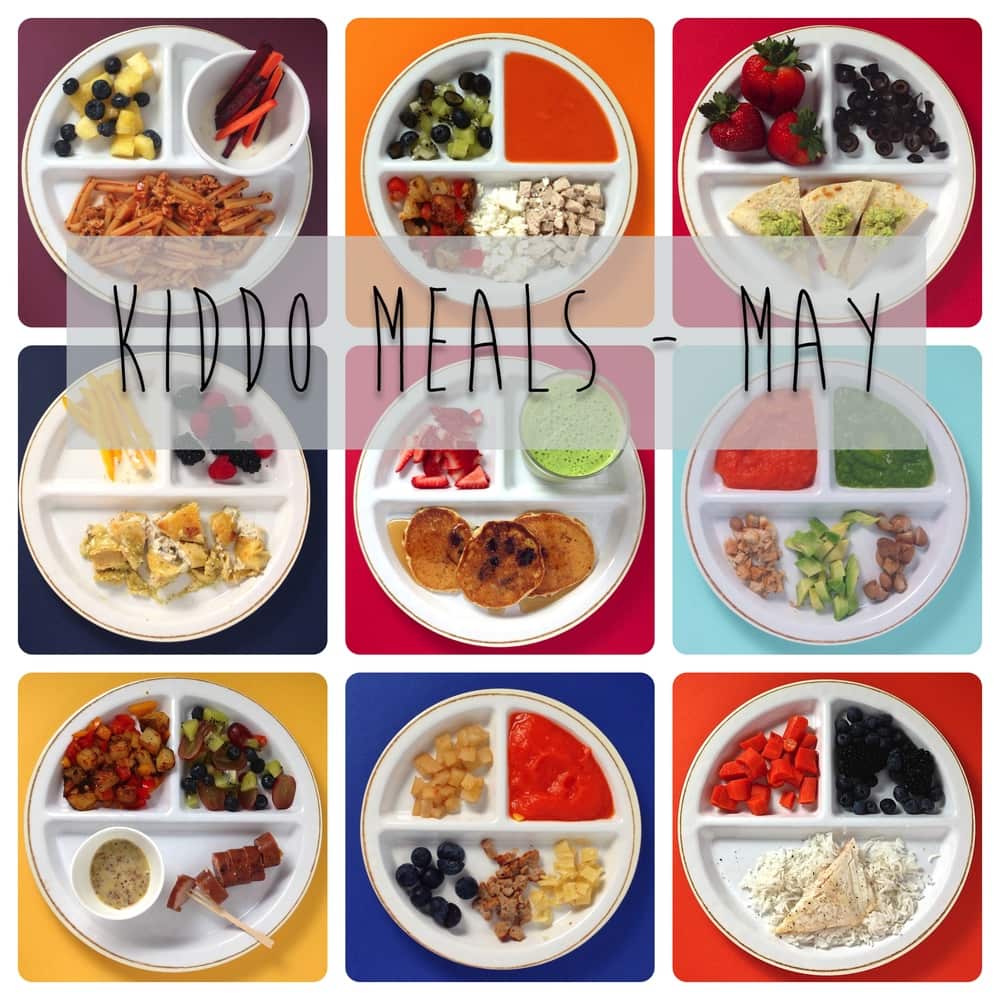 It was funny, when I posted the bottom right hand photo from Ellie’s Breakfast on Instagram I got some slack (and some unfollowers) for feeding Ellie too much meat and dairy and overall just way too much food for breakfast. It kinda just made me laugh because I guess I am totally un-phased by how much my little ones can pack away – meat and all. The thing is, my girls (and all babies and toddlers) have a great ‘stop’ button in them, so when they are full they are full and they will stop eating. This means that sometimes they eat a ton and other times they don’t eat at all. I see no problems with this and I fully encourage them to listen to this ‘stop’ button in them (because I wish my button was louder, especially around sweets). I usually say in the Verdict section how much they eat and most of the time if they don’t eat something for one meal, I save it and they have it for snack or in another meal. On the other matter, I fully support vegetarians and vegans (I was a vegetarian for many years) but at this time, I am actually trying to raise my cholesterol so my family is eating more meat, eggs and dairy then ever before. If you don’t eat meat or dairy, just sub something out instead of my meat products. 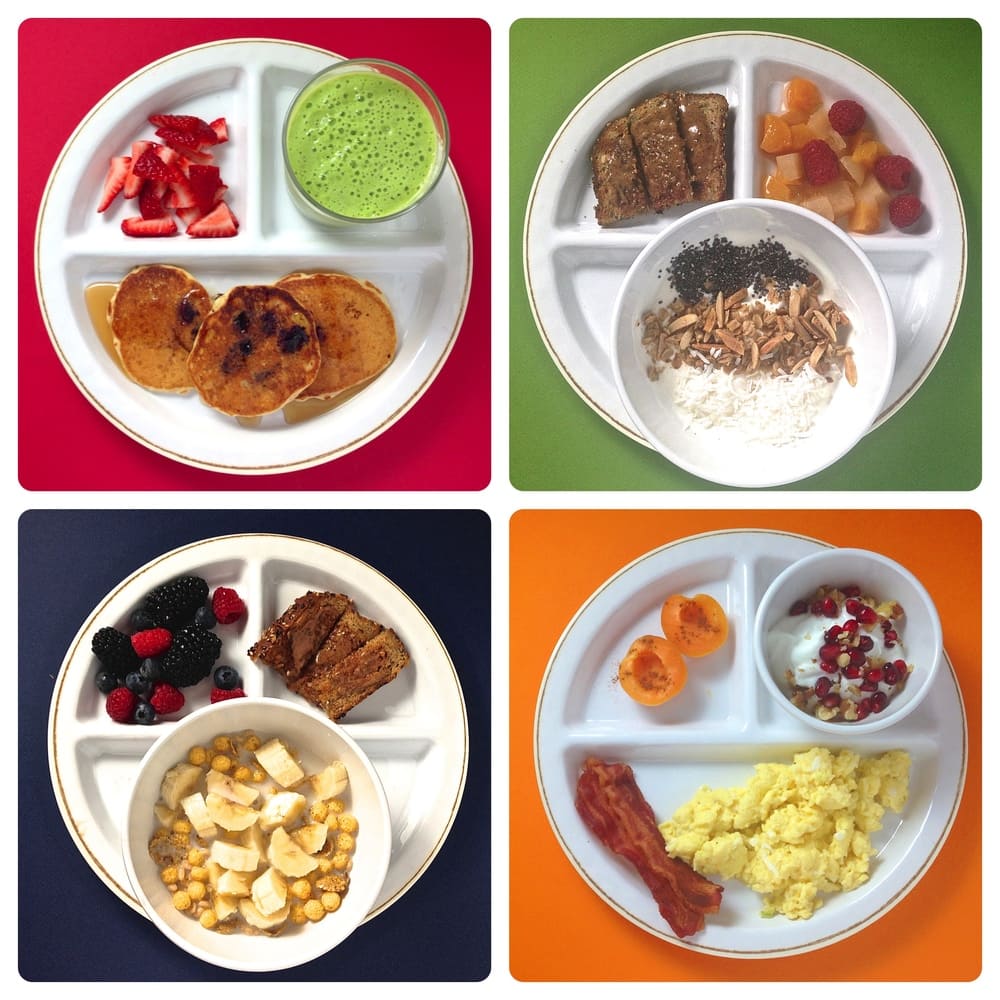 When I start to put together a meal for either of my girls I do a little tally in my head. It goes like this –
1  Protein
2  Color
3  Fun

It’s 3 little steps that help me balance all of their meals. Protein is so important for all ages to build lean muscle and to give us fuel for the day. My go-to sources of protein for my kids is from meat, yogurt, nut butters, nuts and eggs. Color is always my second step because when your kids are eating a colorful meal you can rest assured that they are getting their fill of fruits and vegetables. The hard part is to remember to always change up what colors they are getting so they get well rounded nutrients in their diets. You don’t need to go overboard on the last step – maybe a fun dip, a toothpick to eat with (this totally didn’t work in my house, I think we almost lost an eye during dinner) a small dessert or a favorite food is all it takes to have a little fun with their meals.

Top Left
Meal- 3 mini lemon + blueberry pancakes with maple syrup, chopped strawberries and a green smoothie (spinach, apple, pineapple, honey and almond milk) Verdict- after being sick and not eating anything for 5 days (except for homemade ice-pops) Ellie devoured all of this meal, except the blueberries which she picked out of the pancakes!! Weirdo! She ate it in 5 minutes flat and then went back to watching her three hundredth episode of Octonauts.

Top Right
Meal- fancy style Greek yogurt with coconut flakes, homemade granola and chia seeds, whole wheat toast with almond butter and peaches + pears + raspberry fruit salad. Verdict- first of all sorry this picture is totally grungey but baby P put my phone in her mouth and got some nasty something or another on my lens, thanks honey! Anyway, Ellie ate all of the fruit, none of the bread, all of the yogurt but none of the granola, she just spooned the granola off to the side and ate around it. She also ended up with yogurt A-L-L over herself and she was so mad when I had to do a full wipe down on her afterwards.

Bottom Left
Meal- organic gluten free cereal with bananas, berry salad and whole wheat toast with almond butter. Verdict- this time she ate all of the bread (so confusing), all of the banana and some of the cereal and none of the berries. I put the berries in her snack after sneaking some for myself.

Bottom Right
Meal- 2 scrambled eggs, bacon (nitrate free), apricot with a sprinkle of cinnamon and Greek yogurt with chopped walnuts and pomegranate seeds. Verdict- Ellie ate about half the eggs and then gave the rest to baby, who just can’t get enough of them, polished off the bacon and apricot and ate some of the yogurt after dipping her bacon into it. I saved the rest of the yogurt for snack. 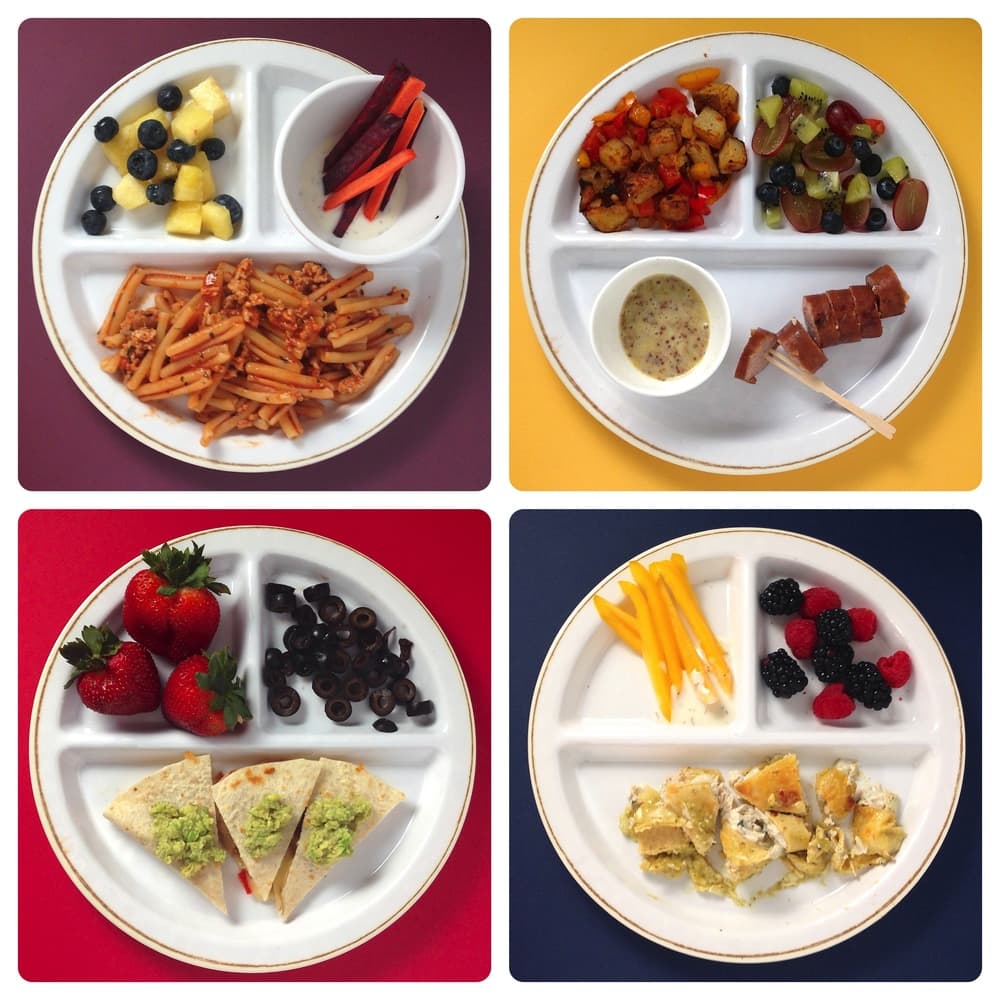 Top Left
Meal- pasta with homemade tomato + chicken ragu, pineapple + blueberry finger salad and beet + carrot sticks with dipping sauce. Verdict- of course Ellie ate all of the pineapple and blueberries first, had one bite of the beet stick and the gave me the entire bowl as a gift, and then ate most of the pasta and chicken. It took her forever to eat the pasta, like 20 minutes, because her and baby were having a dance off in their chairs! Fun Sunday dinner, until I was cleaning up and saw that probably half of the pasta had landed on the floor.

Top Right
Meal- chicken + spinach + feta sausage with homemade mustard sipping sauce, potato + red and yellow pepper hash browns and kiwi + blueberry + grape finger salad. Verdict- I swear I had posted this picture before but for the life of me, can’t remember where. Anyway, the events are hazy but I remember the cute party toothpick very quickly became a sword and baby’s hand got poked and then Ellie almost lost an eye. It was a total fail on my part. I can’t even remember what she ate, I think I gave up mid-meal and started drinking heavily!

Bottom Left
Meal- cheese quesadilla with left over sausage and peppers and a dollop of guacamole, whole strawberries and sliced black olives. Verdict- this super fast lunch didn’t go over very well. Ellie ate the olives, the green leaves off one strawberry and one dollop of guacamole. I keep trying to get Ellie to like quesadillas but it hasn’t taken so far.

Bottom Right
Meal- grammy’s green tomatillo + chicken enchiladas (recipe in book), yellow pepper sticks with yogurt herb dipping sauce and berry finger salad. Verdict- she ate all the berries after first putting them on her fingers, half of the enchiladas (I was happy to finish them for her:) and 4 of the yellow pepper sticks. I have been trying really hard to get her to embrace peppers again, last year she couldn’t get enough of them but for the last 6 months she has wanted nothing to do with them. This is the 6th or 7th time I have served them recently and she has finally started to eat them again – at least for this meal!!:) 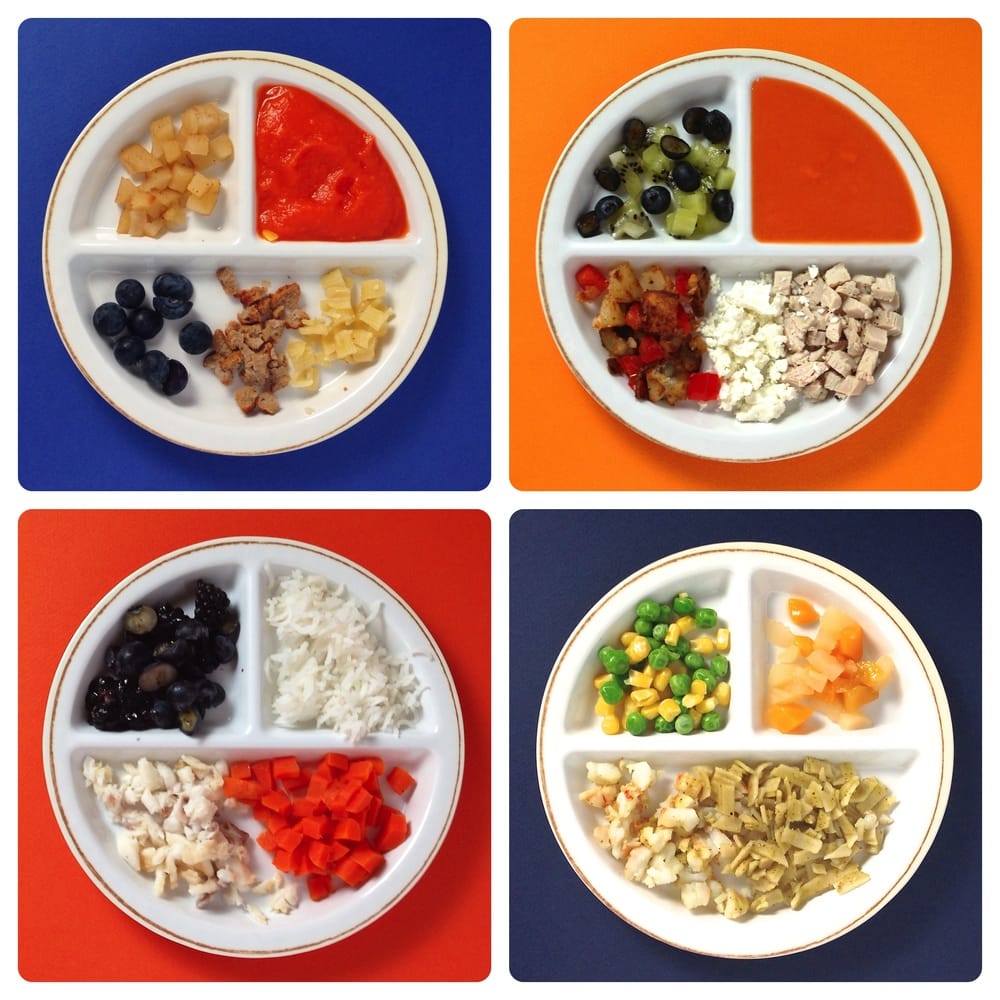 Baby Parker is in full blown finger food mode. She insists on feeding herself and will only eat purees when it is from a pouch or if it has yogurt in it. I swear, Ellie was almost 15 months when she stopped eating purees (granted she will still eat them from a pouch as well), this finger food territory is a little new for me. There is something so simple about taking some cubes out of the freezer, defrosting them and being able to have a well balanced and colorful meal for baby without a ton of thought during the mealtime crunch. Coming up with finger foods on demand that have spice and flavor is proving to be harder then I thought, but don’t worry I am in production of a new e-book that will have all of my favorite finger foods for you with tips and tricks I have learned along the way, and I promise cheerios and toast is not going to be in it:)

Top Left
Meal- apples simmered in cinnamon, cloves and ginger, carrot + nutmeg puree, organic noodles with olive oil, chopped turkey meatball and blueberries. Verdict- I find that little pieces of food are way better for baby then bigger sticks of food. Long skinny pieces of food worked great for Ellie, but baby Parker just shoves the entire stick in her mouth and then chokes on it! Scary!! She ate all of the carrot puree plus 2 more ounces, tried to self feed the rest of the items to herself, which she got 1/3 on her mouth and the rest ended up on the floor.

Top Right
Meal- roasted chopped chicken, feta cheese, red and yellow pepper hash browns and kiwi + blueberry finger salad and red pepper and carrot puree. Verdict- it is confirmed – feta is one of baby’s favorite foods! She kept getting pissed if she didn’t have a chunk of it in front of her at all times. She polished off the entire plate of food!

Bottom Left
Meal- tilapia + lemon and garlic, blueberry and blackberry salad, rice and steamed carrots with olive oil and nutmeg. Both of the girls had the exact same dinner, except Ellie’s wasn’t as chopped up as Parkers was. Verdict- both girls were in a crazy crabby mood (I swear one of them was crying throughout the entire dinner) so they both ate only a little of their dinner. Baby P had a good amount of fish, all of the berry salad and attempted to eat the rice but it mainly got on the floor. I felt like the girls bonded together to make my meal miserable. Sisters forever!!

Bottom Right
Meal- left over chopped shrimp and rice pasta with homemade pesto, peas and corn salad with a little coconut oil and chunks of peaches and pears. Verdict- she ate about half of everything! She had shrimp and pasta for dinner the night before and totally love it so I had no problem giving her the left overs for lunch. Since no one in our families has a fish allergy, we were not worried about introducing shell fish to her at such a young age.