This toddler and kid-approved Blueberry Coconut Granola will be a huge hit for breakfast or snacktime!

This recipe all started a couple of weeks before my due date, during my crazy nesting filled days, which for me were equally about scrubbing the bathroom e-v-e-r-y-d-a-y to the point of being on the verge of OCD and at the same time preparing big batches of food that were enough to feed an army for after I delivered the baby. I admit I went a bit over the top. My bathroom has sense went completely downhill and my freezer is just at the point of being able to open without a dozen or so meals falling on my toes.

It was during my heyday of preparing food, that I decided I needed to make not one granola recipe but three. And while I was at it, I should probably just go ahead and double or triple each of these recipes. Why not, right? Granola is always a good idea.

This one was for my little Ellie, filled with some of her most coveted things – blueberries, coconut flakes and almonds. Plus some things that I like to sneak into her food to make it extra healthy – flax seeds, coconut oil and a small pinch of Himalayan sea salt.

A one-bowl recipe where all the ingredients are gently tossed together until just coated in a mixture of healthy coconut oil and sweet local honey and then tossed onto a pan and baked until just golden brown. This recipe is great to make with your little one as long as you are prepared for them to snack on the little goodies while you measure and mix.

We have been diving into our 3 batches of this delicious granola by sprinkling it over greek yogurt mixed with plump blueberries and sliced peaches, eating it simply with organic whole milk and even as a finger snack when we are on-the-go. However you devour this recipe, I think you would be wise to get a little crazy like me and double or triple it. You won’t regret it. Promise. 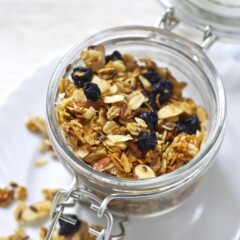 Age: 1 year and up Storage: Store in air-tight container. It will last 3-4 months.

Did you make this recipe?

« Previous PostMonday Inspiration
Next Post » Getting to Know – Sara