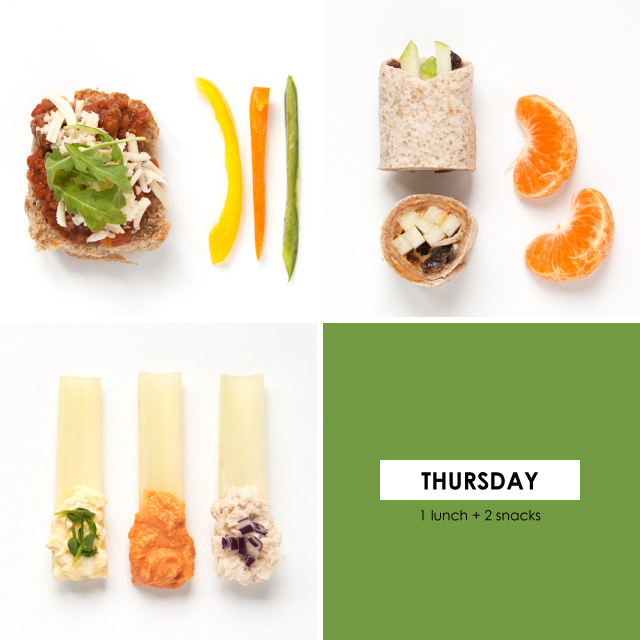 LUNCH – Homemade Sloppy Joes
To make these easy Homemade Sloppy Joes, I used 2 cups of Classic Tomato Sauce, that I had left over from another meal, where I had doubled the basil and oregano to make a more flavourful sauce. I simply browned 1/2 pound of ground beef, drained it, added the 2 cups of sauce and heated it through.

Sometimes when I’m serving something new to the kids I keep some foods separated out, like here with the peppers. Depending on the reaction I get from the kids, I might mix them together when serving it another time. For example, if everyone ate the peppers or if the kids dipped the peppers in the sauce, then the next time I would try adding them right to the sauce, but if some of the kids didn’t want to eat the peppers I would continue to serve them separately for a while.

To serve this same meal to the younger kids, I put the sloppy joe mixture in a bowl, so they can eat it with a spoon and then I serve both the bun and the peppers cut up into age appropriate size pieces, on the side.

SNACK – Peanut Butter + Apple Stick + Raisin Roll Ups
These roll ups are an easy on the go snack or lunch. They can be made up ahead of time, which makes getting out the door that much easier. Just lay out some whole wheat wraps on a work surface, spread peanut butter over the entire wrap, line up some apple sticks (cut by hand or using a mandoline) down the center, going from one side of the wrap to the other and sprinkle on some raisins and a little cinnamon. Then roll them up and wrap them individually in foil or plastic wrap and pop them into the refrigerator. I usually cut them in half or into pinwheels before packing them in a cooler or serving them at home.

Tip: To prevent the apple sticks from turning brown, soaked them in 2 cups of cold water, mixed with 2 tablespoons of lemon juice, for 5-10 minutes.

SNACK – Loaded Celery Sticks – three more ways
Loaded celery sticks are a classic kids snack, but there are so many healthy and fun ways to serve them, rather than the traditional processed cheese spread. Here I used three different spreads – from left to right – Classic Egg Salad, Roasted Red Pepper Hummusand Tuna Slaw Salad. Making up a spread like one of the three I used here, at the beginning of the week, is a great way to save time making lunches and snacks. Check out some of my snack and lunch ideas using Roasted Carrot Hummus to see how helpful it can be.