Sign up Today! Course
How to Feed Your Baby (get the free guide!)
Subscribe Now
Home » Food » What the Kiddos Ate – June

What the Kiddos Ate – June 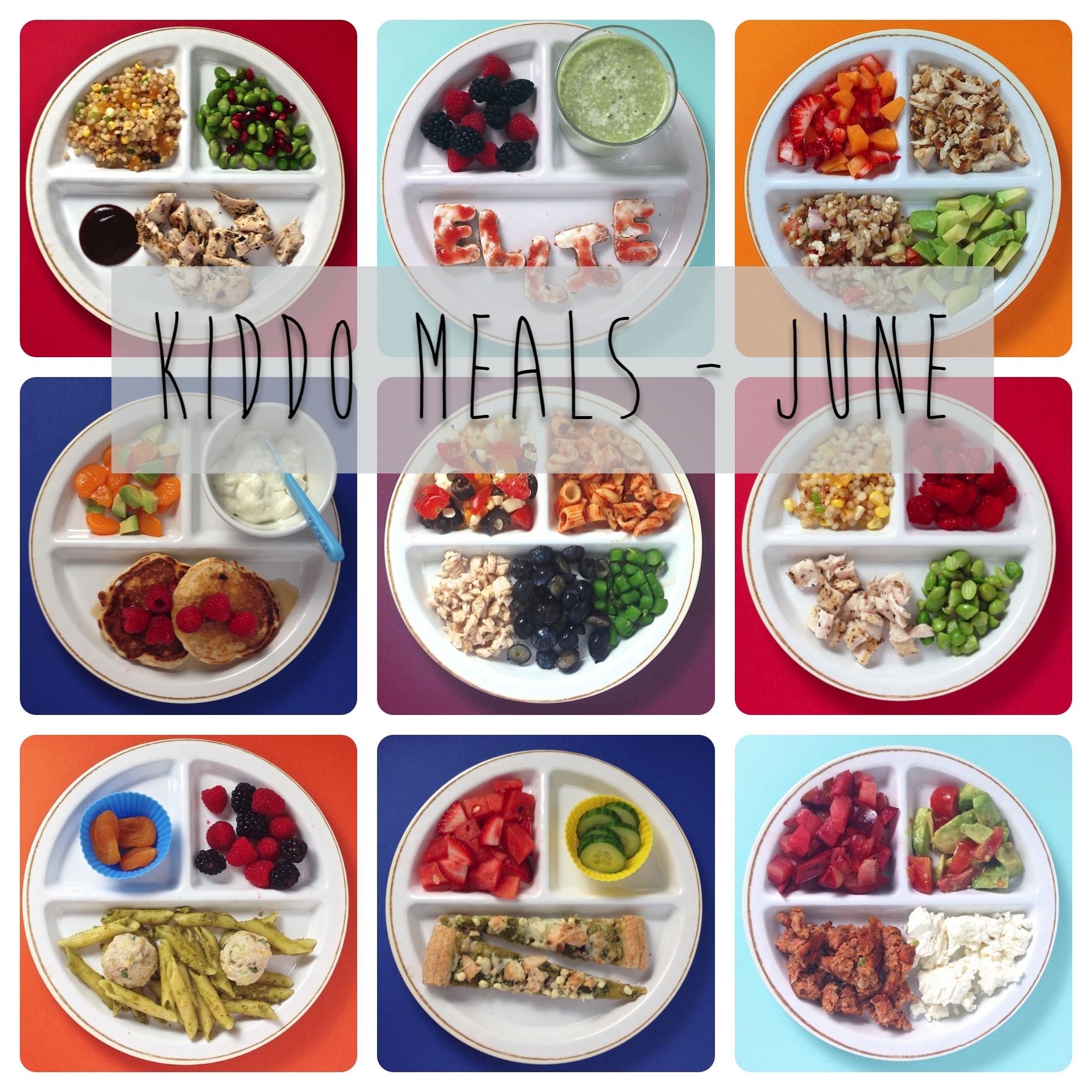 June marks the sixth month that I have been doing this series on What the Kiddos Ate, and let’s take a moment to notice (and freak out) that the year is halfway over! I am not sure how that happened either.

The most fun and dramatic thing to witness over the past six months is the change in what baby Parker has eaten (or tried to eat). She started in purees and she is now eating almost exactly the same foods as the rest of the family, in fact sometimes you can’t even tell which plate is Parker’s and which one is Ellie’s. And more times then not, Parker is eating Ellie under the table!! 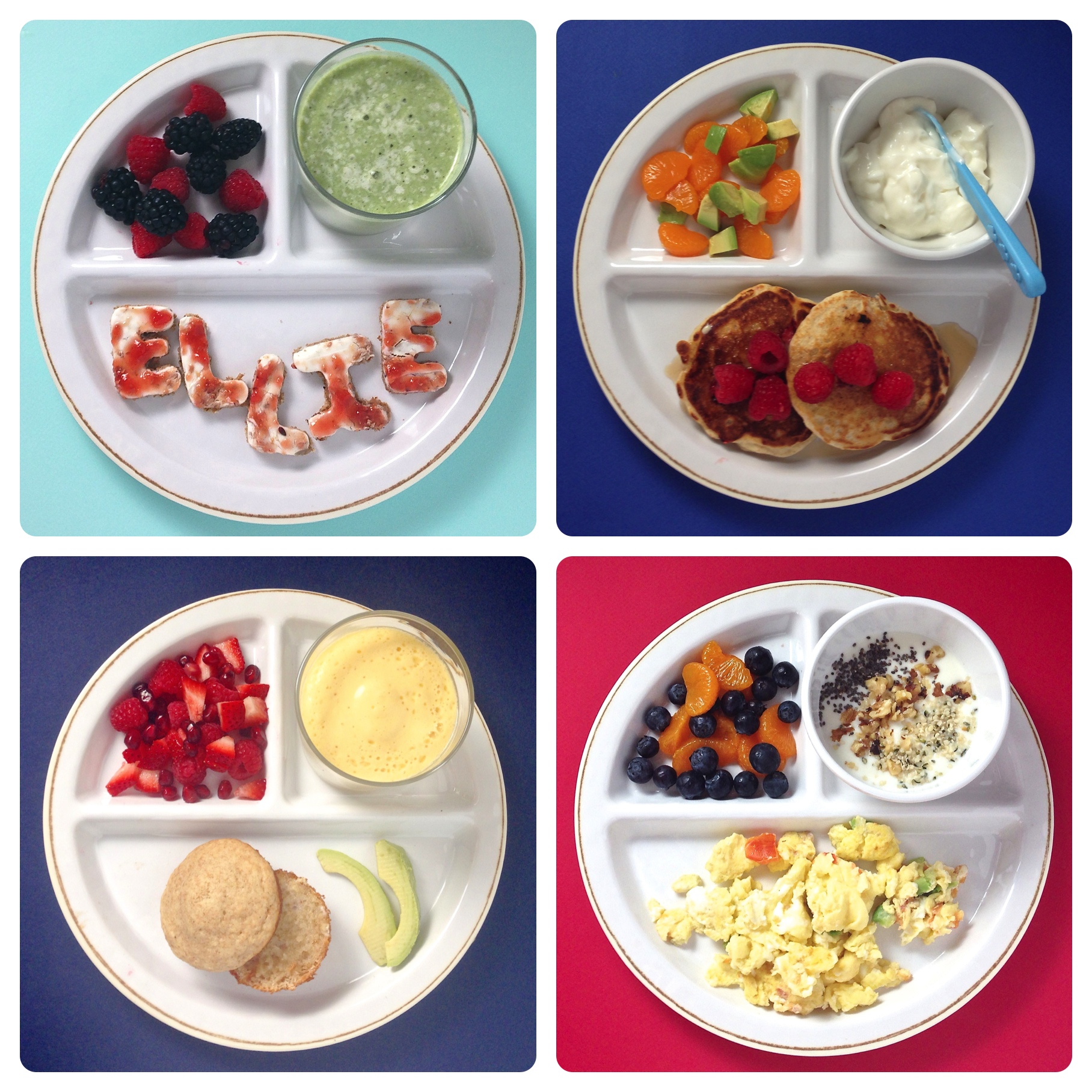 Top Left
Meal- letter toast with cream cheese and homemade peach + raspberry jam, berry salad and green smoothie (2 kiwi, 1/3 cucumber, 1/2 banana, 4 sprigs mint, 1 juiced lime, 1 cup frozen spinach and 1 cup almond milk). Verdict- don’t look at me like that! Usually I would never take this much time for breakfast, BUT #10 on our library’s summer reading program is that you are supposed to make cookies and cut them into letters with your child. I skipped the cookie part and we just made toast letters instead. Not sure if I am going to get around to #33 which is to table things around my house, so I am going to call this a win. Also, she ate the ‘e’, all the raspberries and 2 servings of her smoothie (which also happened to be my portion of the smoothie:).

Top Right
Meal- cinnamon pancakes with raspberries and maple syrup, avocado + orange finger salad and plain greek yogurt. Verdict- this meal was pretty boring! Ellie of course didn’t touch the yogurt until she realized that it made for a good finger paint and while I was making a cup of coffee, she painted the entire table, her face and was just about to paint baby until I noticed what was going on!! Why is yogurt so hard to get off of everything???

Bottom Left
Meal-  blueberry muffin (not sure where all her blueberries are hiding), sliced avocado, red berry finger salad and mangolicious smoothie (mango, orange, carrots, pineaple and flax seeds). Verdict- she drank 2 cups of smoothie before she started blowing bubbles in her glass😳, half her finger salad, half of her muffin and all of her avocado. The leftovers went into her snack bento box.

Bottom Right
Meal- scrambled eggs with heirloom tomatoes and avocado, blueberry and orange finger salad, yogurt with hemp seeds, chia seeds and chopped walnuts. Verdict- Ellie ate about half of everything and somehow talked her grandma into giving her an entire slice of cinnamon swirl toast! 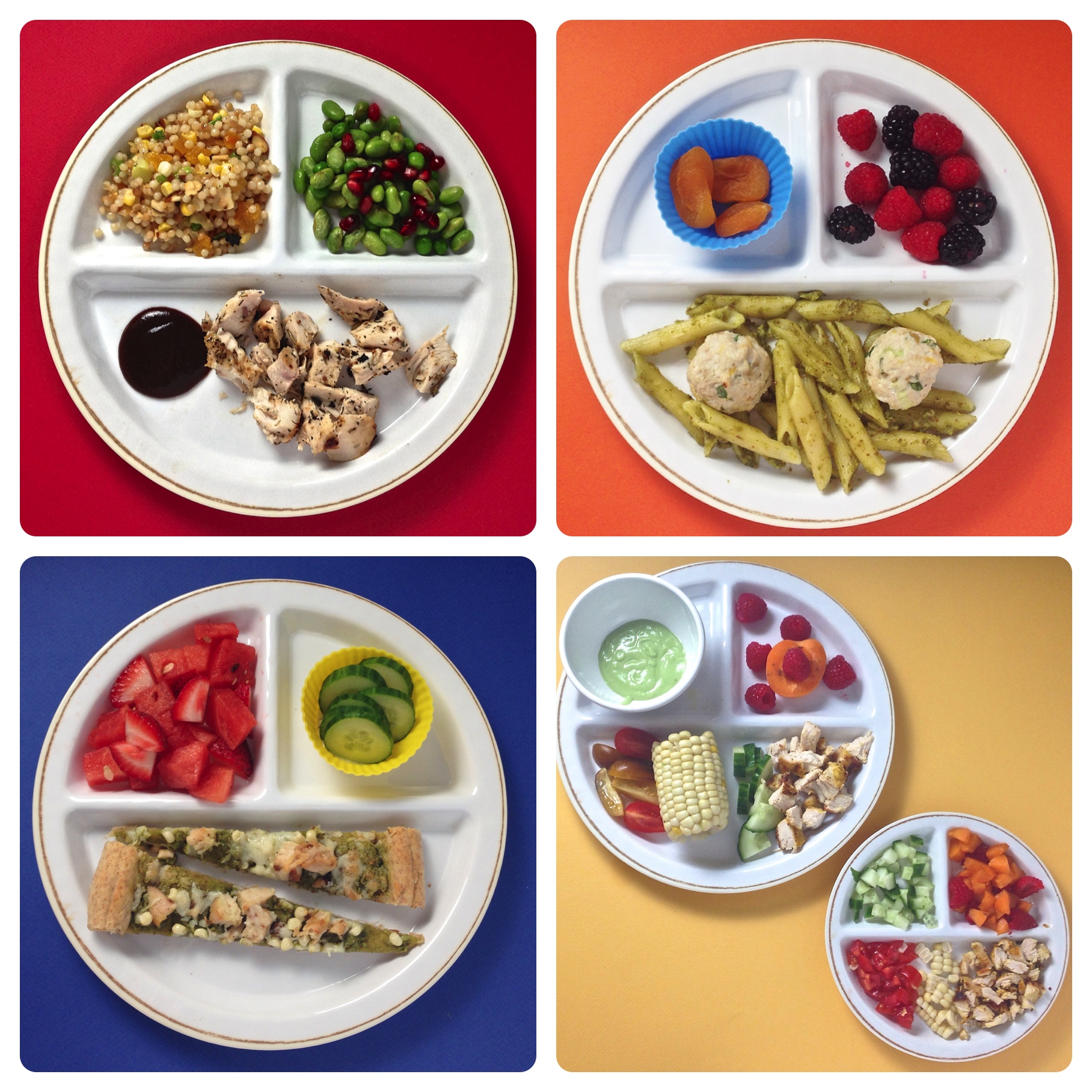 Top Left
Meal- roasted chicken with thyme and lemon and a bbq dipping sauce, pearl couscous with dried apricots, corn, olive oil and green onions, edamame + peas + pomegranate seeds. Verdict- Ellie ate about half the chicken and was really into eating the bbq sauce with her finger, almost all green finger salad and 1 spoonful of the couscous salad.

Top Right
Meal- pasta with spinach + basil pesto (recipe in Little Foodies Book) and chicken meatballs (recipe will be on blog soon) dried apricots and raspberry + blackberry salad. Verdict- she ate 2 noodles and all the apricots and then declared she was full! Don’t worry, Baby and I totally split her plate and ate the rest:)

Bottom Left
Meal- pesto + chicken + corn pizza on homemade whole wheat crust, watermelon + strawberry finger salad and cucumber slices with a herb yogurt dip. Verdict- Friday is almost always pizza (and wine) night at our house, which means it is usually my favorite dinner!! E ate the finger salad first, gave hubby her cucumbers after having one lick of the dip (might need to make a new dip recipe for her) and ate most of the pizza, cheese and toppings first and then the crust.

Bottom Right
Meal- chopped ‘salad’ for both of Ellie and baby Parker. Heirloom tomatoes, corn on the cob with butter and cumin, cucumbers, chicken with a mustard rub all dipped in a avocado + lime + cilantro dressing. They also had an apricot and raspberry finger salad with cinnamon.
Verdict- I love it when I can cook 1 meal for the entire family. It doesn’t always happen since baby P isn’t eating everything yet but we are getting there. Hubby and I had all the finger foods the girls had over a huge bowl of mixed greens with some cheese of course:) the girls didn’t nap that day so they were in rare form, but they still ate about half of everything. Ellie finally figured out the dipping concept in life (!!!) so I didn’t have to clean the avocado dressing out of her hair. I’m calling dinner a win! 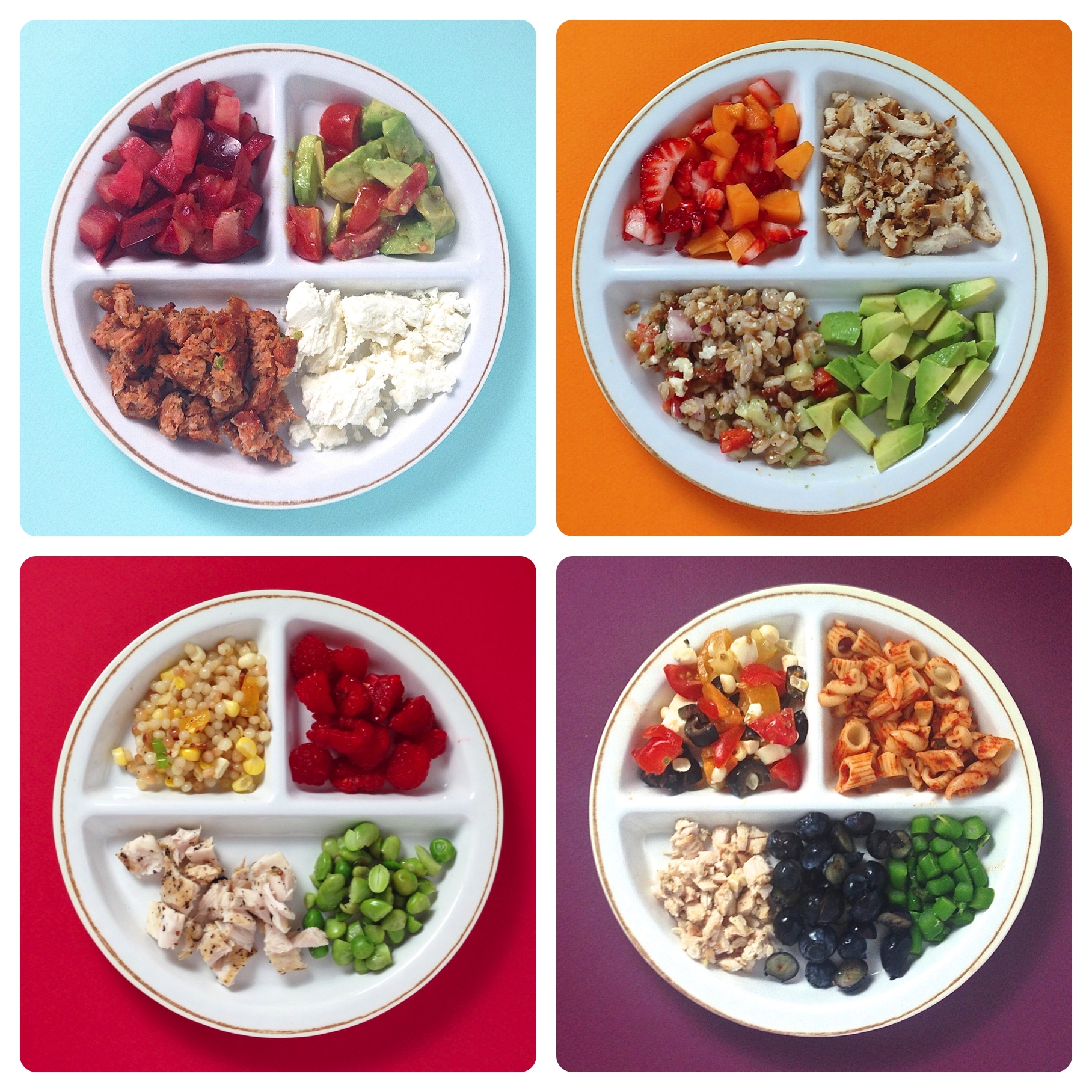 Top Left
Meal- Family Meal (!!!) grilled salmon burgers with poblano peppers (Ellie and hubby had theirs on a bun, I had mine over an arugula salad), feta, grilled plums + cinnamon (the rest of us ate this for dessert with honey, vanilla yogurt and chopped walnuts) and tomato + avocado finger salad with lemon vinaigrette. Verdict- both kids polished off the feta first, then about half of the finger salad and salmon burger. Baby P didn’t seem to care for her plums (is she crazy?!?) the rest of us polished them right off!

Top Right
Meal- chopped avocado, Mediterranean farro salad (recipe here), strawberry + apricot finger salad and chopped chicken. Verdict- once the annoying big sis left the table (she does much better eating sometimes when her older sis isn’t playing with her) she devoured most of the avocado, chicken and fruit finger salad. She ate the farro one-piece-at-a-time, while giving me a ‘huh…whhhhaattt is this’ look.

Bottom Left
Meal- chopped edamame, roasted chicken, pearl couscous with dried apricots, corn, olive oil and green onions and chopped raspberries. Verdict- Parker ate the ENTIRE plate!! Granted most of the couscous landed on the flour, but she tried to get it all in her mouth!

Bottom Right
Meal- chopped asparagus with olive oil and sea salt, blueberries, chopped grilled chicken, finger salad (heirloom tomatoes, olives, herb goat cheese and corn) and pasta with tomato sauce.
Verdict- I have no idea! I tossed this down on the table for baby P and then I left for a girls night out!!